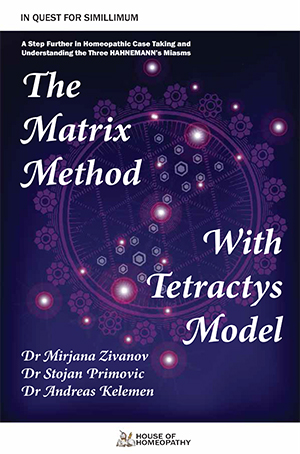 From the REVIEW by Professor Vladimir Holodkov, PhD, B.Sc.Hom., headmaster and co-founder of the Simillimum School of Homeopathy in Belgrade, Serbia.

The authors are aware of the existence of non-replaceable tools of classic homeopathy, because all of us within the homeopathic practice are aware that it takes much time to unlock patient’s vital force during interview. There is some information that in heavily populated India, some homeopaths process as many as up to 150 patients on a daily basis. One such information is sufficient to initiate the system of thinking towards more efficient prescription based on aphorisms 1, 2, and 3 of Hahnemann’s “Organon”.
The authors make a step further, they want to step out from classic case taking and to be connected with miasma theory to reach simillimum in a simpler and more proper manner.
The authors hereof use their knowledge about the specifics of biochemical processes of human being homeostasis and upgrade such knowledge for the purposes of homeopathic practice. Such specifics are shown through the relations of three key hormones secreted by human body when processing emotional perceptions of the environment he exists in: dopamine, serotonin, and noradrenaline. They document whose idea it is. But, they make a step forward.
They do not neglect Hahnemann’s explanation of vital force genetic damage expressed in the notion of miasma. Hahnemann provided clarification for three basic miasmas. The book authors, in certain places, provide the interrelation of miasma and the above-mentioned hormones. How do they do it? They propose matrix method of vital force observation in the space the coordinates of which include the above-mentioned hormones and miasmas and fit such method into the tetractys model.
The offered matrix model with hormones as coordinates and miasmas as the areas of chronic disease behaviour condition, are transformed in the tetractys model with ten points, enabling us to recognise relations among the contents of such behaviour patterns through patient’s miasma. Thus, there is a multidimensional approach to vital force through the understanding of the disorders of mental, emotional, psychological, and somatic components of human being. They consider that vital force complexity may, using a simple verified approach, be mapped in the tetractys characteristic to the picture of substance used as homeopathic means.
Through their abundant homeopathic practice over many years, the authors have strived to, as specifically as possible, reach simillimum, thus, they verified their initial ideas in the practice. Subsequently, they have systematised the model, which includes a number of cases gradually universalised and described herein. In this manner, they provide their personally acquired experiences and knowledge to other homeopaths who, through cognitive processes, may upgrade this view and approach to the homeopathic therapy.
This book is not a product of speculation, it is not based on eclecticism, but it is a documented scientific modelling of vital force behaviour. Therefore, it has been written in the scientific language of homeopathy based on the knowledge of the biochemical system of man’s homeostasis. As the confirmation of their competence, they provide sufficient references to acknowledge the ideas towards the implementation of the proposed model which has got its meaning in their practice.
We think that a useful document is in front of us which may be accepted in sense that their offered solution of homeopathic treatment is usable and verifiable in practice.
Therefore, this publication has got its importance, understandability, and usability for homeopaths. We are confident that such view will find its significance in the practice of other homeopaths to efficiently overcome the obstacles on their way to simillimum.
We are congratulating them for giving their contribution to increase the knowledge in the field. It is up to us to use it in own homeopathic practice.